CALGARY, ALBERTA – TheNewswire - December 5, 2022 – Lithium Chile Inc. (“Lithium Chile”) (TSX:LITH), (OTC:LTMCF) is pleased to announce the results of an updated resource report at the Salar de Arizaro.  The update resulted in a significant increase to Lithium Chile’s lithium carbonate equivalent resource.  The increase is a result of the success of its second production well. That second well, drilled 3.6 kilometers away from the initial production test well, encountered significantly increased thickness in the brine reservoir between 343 meters and 598 meters of depth.

The updated resource estimate was prepared by Montgomery and Associates, an independent engineering firm that has supervised the drilling program such that all parameters necessary to meet the requirements of NI 43-101 are fulfilled.

Steve Cochrane, President, and CEO commented, “This is a significant resource increase as a result of just one additional well - almost doubling the size of the initial resource.  This success gives us great confidence in the areal extend of the Salar de Arizaro – one of the largest in Argentina.  What is important to note is that should our next two test wells be successful in establishing a continuation of the brine reservoir, the resources attributable to Lithium Chile may be even more significantly increased as a result of filling in the area between the test wells.  We look forward to reporting the results of the third production well in the near future - and those of the fourth test well thereafter”. 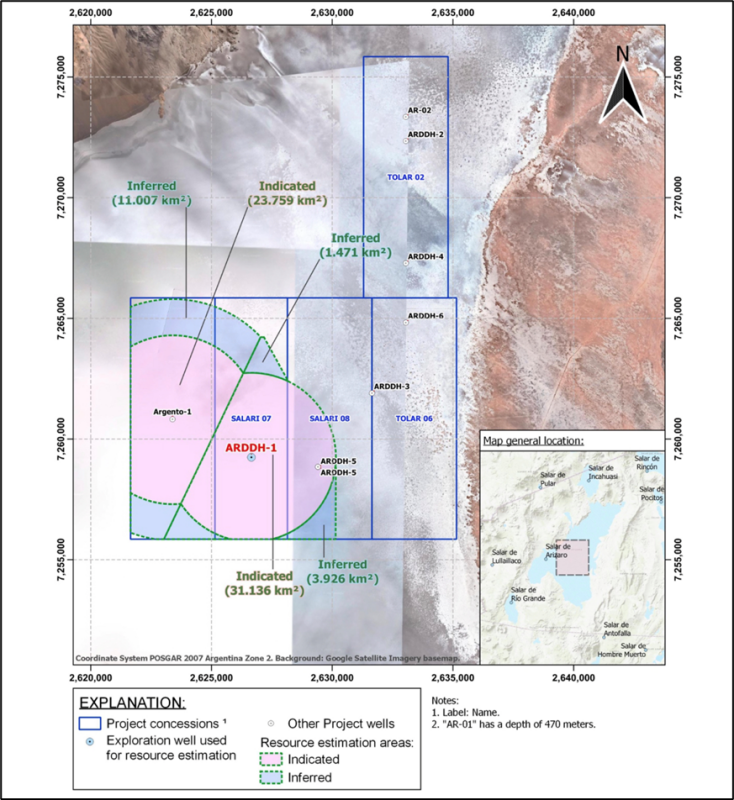 Lithium Chile is also pleased to announce the completion of a successful fresh water well on the southern flank of the Salar de Arizaro. In June 2022, Lithium Chile identified a potential freshwater aquifer and drilled the target during July and August.  A 100-meter-thick freshwater aquifer was encountered and during September, the well was completed, and equipment was installed to determine the productivity of the well.  Based on data collected over September and October, a water usage application was submitted to the Salta Environmental Ministry for a permit allowing Lithium Chile to use up to 75 cubic meters of fresh water per hour. This production rate is more then sufficient to support Lithium Chile’s plans for a 15,000 tonne a year production facility - using either DLE or evaporation production methods.

Lithium Chile is honoured to announce it was awarded “Lithium Company of the Year” at the 2022, Mines and Money, International Event in London.

Michelle DeCecco, Vice President & CCO comments, “This award belongs to the entire Lithium Chile team. 2022 has been a transformational year for the Company; that has been a result of the dedication and talents shown by our incredible group across the globe. Being recognized as “Lithium Company of the Year” is foretelling to the exciting plans, and goals we have for 2023”.

Michael Rosko, MS, PG, of Montgomery and Associates (M&A) of Santiago, Chile, is a registered geologist (CPG) in Arizona, California and Texas, a registered member of the Society for Mining, Metallurgy and Exploration (SME No. 4064687), and a qualified person as defined by National Instrument 43-101. Mr. Rosko has extensive experience in salar environments and has been a qualified person on many lithium brine projects. Mr. Rosko and M&A are completely independent of Lithium Chile.  Mr. Rosko has reviewed and approved the scientific and technical content of this news release.

Lithium Chile is advancing a lithium property portfolio consisting of 84,478 hectares covering sections of 11 salars and 2 laguna complexes in Chile and 23,300 hectares in Argentina.

The Company has a NI 43-101 report with an indicated and inferred resource of 2,587,000 tonnes of lithium carbonate equivalent (LCE) from its Salar de Arizaro, Argentina. The Phase 2 development program on the Salar de Arizaro is currently underway with its results to be included in an updated NI 43-101 report which is expected to be completed during the first quarter of 2023.

NOT FOR RELEASE IN THE UNITED STATES OF AMERICA